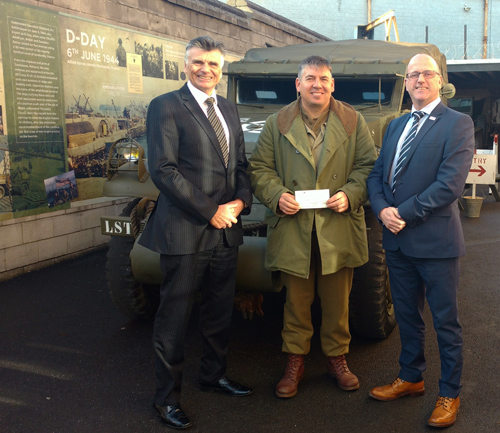 2017 has been a record breaking year for Portland Port’s cruise business, with the port receiving its greatest number of cruise ships and passengers to date.

The Port invests a lot of time and energy into making the cruise calls as successful as possible.  The arrival and departure of every cruise ship is important and helps form some of the lasting impression that passengers have of Dorset and its surrounding area.  For a cruise ship’s departure, the port organises musical entertainment on the quayside along with canon fire from the Nothe Fort Artillery Volunteers, all of which is very well received by the passengers.  Some cruise calls this year have been lucky enough to have a quayside display of vehicles and volunteers from the newly opened Castletown D-Day Centre.  Passengers were able to enjoy sitting in the vehicles, trying on helmets, chatting to the volunteers and having their pictures taken.

The Castletown D-Day Centre is an authentic recreation of Portland’s busy wartime dockyard and shows the important role that Portland played in the allied invasion of northern France.  The centre features an impressive array of wartime artifacts and vehicles, some of which, the visitors are encouraged to interact with.

In recognition of the volunteer’s time and quayside display of vehicles throughout the port’s cruise season, on 7th December 2017, Ian McQuade (Portland Port’s General Manager – Commercial) presented a cheque from Portland Port, for £500, to the Castletown D-Day Centre.  The museum’s curator, Stephen George and Derek Luckhurst, who is the local entrepreneur behind the Castletown Regeneration Initiative, showed Mr McQuade around the Centre and accepted the generous donation.