South Ship Channel is blocked by a wire running across the entrance and the wreck of the HMS Hood also lies on the bottom so it is only accessible by very small vessels.

North Ship Channel is the main leisure traffic entrance to the harbour but occasionally this may be used for large commercial vessels.

Recreational users of the harbour are advised to keep clear of these entrances unless transiting through. 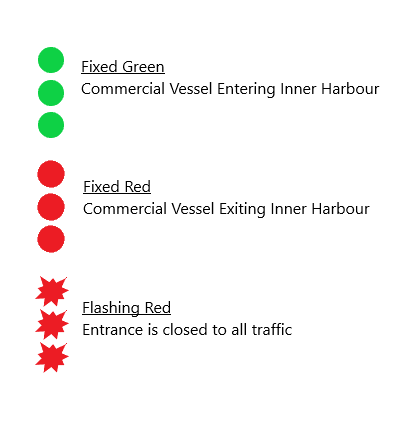 Large Vessels, in particular container ships with deck cargo and car carriers have restricted visibilty for quite a distance ahead, you may be able to see them but can they see you?

Once large commercial vessels have passed a certain point approaching the entrances they are extremely restricted in their ability to stop or deviate from their course to avoid anything in the way. Most recreational sailors take pride in the responsible way they conduct themselves, part of this is the realisation that hindering the passage of a large commercial vessel is dangerous for themselves, their crew, and the ship itself.

Recreational users of the harbour are requested to remind themselves of and observe, the Collision Regulations (COLREGS), Portland Harbour Byelaws, General Directions, and Local Notice to Mariners.