The Portland peninsula, together with Chesil Beach, shelters a vast area of water - a superb anchorage which from ancient times has provided an excellent haven for shipping. The Romans valued the area's strategic importance, and here in 789 the Vikings made their first raids on the English mainland. Portland is a Royal Manor, reflecting its continued maritime importance to the Crown since before the 1066 Conquest.

Centuries of hostilities with the French and the Spanish raised concern for the safety of shipping in these waters. Henry VIII realised that merchant vessels and ships of his new Royal Navy at anchor in Portland Roads were vulnerable to attack. Around 1539 the King ordered a pair of strongly armed fortresses to be built, the (short-lived) Sandsfoot Castle on the Weymouth side, and Portland Castle to command the anchorage.

Portland Castle was strengthened ready to repel the attempted invasion by the Spanish Armada in 1588. In the event the Royal Navy fended off the Spanish fleet in the famous Battle of Portland just east of the isle of Portland.

The castle experienced its only fighting action during the English Civil War 1642-1649. As a Royal Manor, Portland was a Royalist stronghold so naturally supported King Charles. Nearby Weymouth - a merchant town - firmly backed Cromwell's Parliamentarians and a succession of battles and ruses saw Portland Castle captured and recaptured several times. Despite being hopelessly undermanned and inadequately armed, the Royalists managed to keep the island out of Cromwellian hands for all but two brief periods of the war. By 1645, after repeated attacks in Wessex only Portland, Corfe and Sherborne remained in Royalist hands. When defeat finally came in 1646 Portland's surrender was remarkably bloodless, and on surprisingly lenient terms.

Portland's coast has long been notorious for shipwrecks. For want of a refuge, a fleet of 200 merchant ships and military transports under Admiral Christian suffered catastrophic losses in a sou-westerly storm in West Bay in 1795. Only months earlier a local man, John Harvey, published the first idea for a breakwater to form a proper harbour. However another half century was to pass before that dream became a reality.

Queen Victoria and her consort sailed into Portland Roads to a colourful welcome in August 1843. The fact that the queen was very sea-sick before arriving here may not have influenced the Royal Commission for Harbours of Refuge which was set up soon afterwards. But Prince Albert certainly played an influential role behind the scenes, in the development of the breakwater and the massive defence works which were needed to protect it.

The Commission concluded that Portland had the greatest strategic value of all the possible harbour sites. The new Portland Harbour was to be the first naval anchorage specifically designed for the new steam navy.

Prince Albert deposited the first stone for the Royal Portland Breakwater in a grand ceremony on Wednesday 25 July 1849. Engineer James Meadows Rendel produced the initial designs. Miles of railway and inclined planes were built to take the stone from the famous quarries on the top of the Island down to the breakwater site. Resources on a national scale were mobilised to undertake this gargantuan task. The main contractor was John Towlerton Leather, a great technological innovator, who made his fortune on government works here and at Spithead. Engineers, skilled craftsmen and administrators came from all parts of the country, while thousands of convicts who had been sentenced to transportation to the Colonies were brought here to quarry the vast quantities of stone required. A large temporary Convict Prison was built high above on Portland's East Cliff.

To construct the breakwater Rendel designed a massive timber staging supported on 33m long piles screwed into the sea bed, guided into place by divers. This supported five lines of railways, and the whole had to withstand storm conditions as it advanced two miles out into heaving seas. Visitors came from far and wide to see the progress, as millions of tons of stone were laid. This was late Victorian Dorset's greatest tourist attraction by far, and by the 1860s this was the country's most expensive public project. 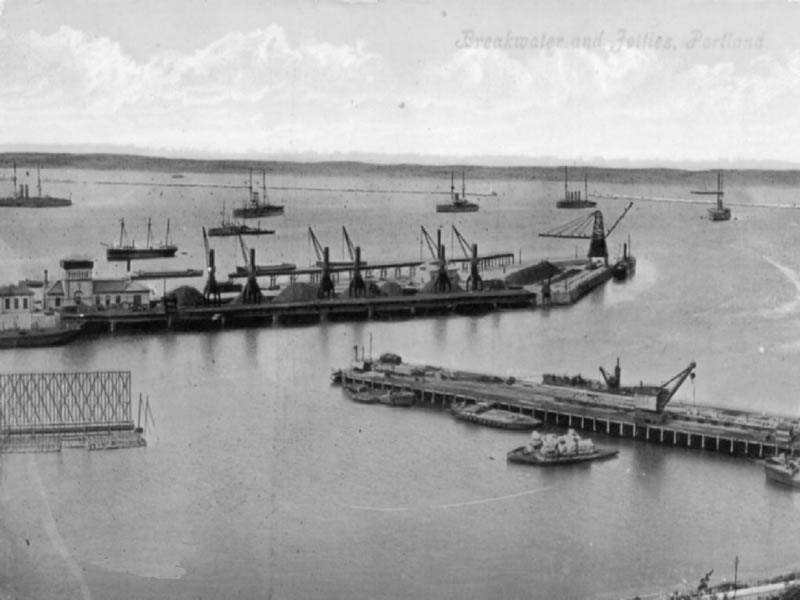 The scheme moved on through the next quarter century, guided by (Sir) John Coode who succeeded Rendel as Engineer-in-Chief. There were heavy losses: A temporary wooden lighthouse was burnt down; the staging was torn asunder in storms; vessels were wrecked on the unfinished breakwater wall; locomotives and trucks plunged into the sea, and lives were lost in terrible accidents. Despite these the project was a great success, and even the uncompleted breakwater arms were able to protect the great fleets of Royal Naval ships. In 1859 it was announced that because of the size of the new harbour, already the largest man-made harbour in the world, Portland was to be the start for Isambard Kingdom Brunel's immense steamship Great Eastern's transatlantic voyages. Fate determined otherwise when an explosion crippled the vessel before she arrived, and the legendary Brunel died whilst she was under repair at Portland. The Great Eastern proved unviable as a passenger liner, but she did return here several times during her successful undersea cable laying service.

The harbour breakwaters were of an awesome scale, and the associated defence works were stupendous. Prince Albert made several visits to see the entire summit of the Verne Hill, overlooking the new harbour, being remoulded and transformed into the great Verne Citadel (now a prison). A smaller fort was constructed on Nothe Point, Weymouth, while a large fortress on the breakwater itself posed the greatest engineering challenge of all. The scale and engineering achievement of these works impacted on the nation, at a time when British Empire was at its peak. All these engineering works, including half-hidden gun batteries embedded in the Portland hillsides, were duly completed, and remain to this day monuments to Victorian boldness and ingenuity.

In 1862 the Training ship Britannia "the nursery for our future admirals" was stationed here. She stayed for three years but was transferred to Dartmouth which had won a battle with Portland for the prestigious shore-based naval college. However for 40 years Portland Harbour was base for a succession of training ships, each named Boscawen. The completion of the first two arms of the breakwater was marked by an impressive ceremony on 10th August 1872. Both the Channel and Reserve Squadrons, headed by huge broadside ironclads including Minotaur, Agincourt, Achilles and Hercules gave a royal salute to welcome the Prince of Wales for the event. These government works and the presence of naval and military personnel had an economic impact on the Island and South Dorset which was to last for 150 years.

The Harbour in late Victorian times was an impressive sight, with up to 200 head of sail at anchor or moving at any one time. The nation's - and the world's - greatest vessels were regularly here, including the greatest of all, HMS Warrior, Britain's first ocean going battleship, which was fitted out with electric lighting while spending her later years here as Portland's guardship.

Two final breakwater arms completed the enclosure of Portland Harbour in 1906, as a counter-measure against torpedo attack. This was a time of rapid transition from coal and steam powered vessels to oil. Costly coal handling machinery was now redundant, and a prime wildlife habitat - an ancient tidal creek called the Mere - in the south-west corner of the Harbour, was taken for a vast fuel tank farm.

The torpedo was developed at Whiteheads factory on the Wyke Regis frontage of the Harbour in the 1890s. This set the example for Portland's world pioneering research on underwater weapons through the ensuing century, from asdic and sonar in the 1920s to hi-tech Stingray torpedoes in the 1980s.

The looming conflict with Germany before the Great War saw the arrival of the Dreadnoughts, and drones in Portland's skies marked the coming of the flying pioneers. King George V watched thrilling aerial displays from the royal yacht in the harbour in May 1912. The occasion saw a biplane to be the first British flight from a moving ship. The King then took the first ever royal trip in a submarine. Two years later the Grand Fleet assembled in Portland Harbour before sailing to Scapa Flow. The old battleship HMS Hood was scuttled to permanently block the vulnerable South Ship Channel between the first two breakwater arms.

The peace of the 1920s turned to anxiety in the '30s with realisation that a second world war was inevitable. In 1936 the King came to see for himself Portland's top secret research and naval manoeuvres. The harbour played a vital role in the 1939-45 war. Among the many terrifying events was the bombing of the anti aircraft ship Foylebank at station in the harbour in July 1940. Crewman Jack Mantle was mortally wounded but valiantly stayed at his post firing at the enemy raiders until he fell. For this he was awarded the Victoria Cross.

The Second World War culminated in the greatest assembly of man and machine this coast has ever seen. On 1st May 1944 the base was commissioned as USNAAB Portland-Weymouth. Then the King, Prime Minister Churchill and Free French leader Gen. De Gaul came to see the great D-Day preparations. The entire harbour was seething with activity. Nearly 1/2 million troops and 144,000 vehicles left this port in a just a few hours. Portland's contribution was noted by messages from the United States "..For over a year your Island of Portland has been a key factor in the movement of troops and their weapons of war to the far shore in the liberation of the Continent..." and "You are the biggest little port in the world, you have been wonderful." The American Ambassador commemorated this by unveiling a plaque in Portland's Victoria Gardens.

The Sailing Academy sits precisely over one of the D-Day embarkation "hards".

In 1946 10 enormous Mulberry Harbour "Phoenix Caissons" units were towed here from France under the premise to provide shelter for pier construction. 8 of these were then shipped to Holland to aid their sea defences after the great flood of 1953. The other two remain in Portland Harbour to this day and are both listed buildings.

Post-war peace brought many changes. Ships of all NATO countries now frequented the harbour, as the harbour became what was claimed to be the world's premier work-up and training bases. Ships, officers and crews were put through vigorous and realistic exercises all monitored by the Flag Officer Sea Training.

With the end of the cold war the government decided in 1993 that Portland's historic Royal Naval Base was to close. The departure of the last Flag Officer Sea Training in July 1995 ended a long and proud era for the Island.

A new dimension was added in 1959 with the formation of the Royal Naval Helicopter Station. The last vestiges of the old Mere were filled in to create the naval largest helicopter airfield in Europe. HMS Osprey's helicopter squadrons were prominent in many incidents around the globe, including the Falklands and Gulf conflicts. while its Search and Rescue service has saved countless lives around Dorset's coast over the years.

The huge RNAS helicopter base closed in 1999 and here now is now Osprey Quay, and the Weymouth & Portland National Sailing Academy.

Portland Harbour has now been revitalized. Over centuries Portland Roads and the harbour hosted countless thousands of warships, all now given way to peaceful sport and recreation. Naval ships – including nuclear submarines – still visit Portland Harbour which is part of Portland Port.

Man and Nature have combined to give South Dorset a spacious maritime resource without equal in a unique and precious environment.