Berth Improvement Given the Go Ahead at Portland Port 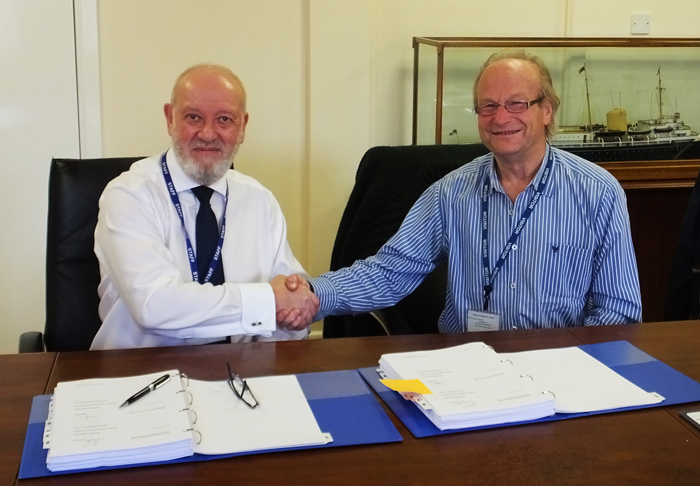 The nature of shipping at Portland Port is changing rapidly; as the cruise business continues to grow, the Port’s cargo customers are also seeing a significant growth in activities and there is an increased use of the port by military vessels.  These good news stories not only mean a growing number of vessels visiting the port, but they are increasing in size as well.

This growth in all areas has driven the need for significant investment in to the port’s infrastructure.  The port undertook a major extension to its main cruise and cargo berth, which was opened in April 2017, and dredging is currently taking place to increase the water depth at this berth, Outer Coaling Pier (OCP), to 11 metres.  The dredging of OCP, which is nearly complete, will allow the port to accommodate fully laden Panamax bulk cargo vessels and tankers, as well as cruise vessels up to 350 metres in length.

To further support the port’s growth, the Board of Portland Port have approved in principle, the deepening of the seabed level either side of the Queens Pier outer arm, from 8 metres to 11 metres.  Queen’s Pier was originally constructed in 1952 by A E Farr Ltd, using reinforced concrete piles that were manufactured locally as the berth extended seawards.  In 1973 it was further extended using similar design parameters but supported on steel piles.  In 2011 two strong points and a new dolphin were built to accommodate the larger forces attributable to evolving vessels that would be accommodated on the berth.

To achieve the desired 11 metre depth, a major project must be undertaken to ensure the inherent strength of the berth is maintained.  The project will involve sheet piling either side of the berth to maintain the historic context of the structure.  Once the sheet piling is in place on either side of the berth, the dredging can then begin.  At the same time the berth will be extended by the construction of a new mooring dolphin, resulting in a facility for berthing vessels up to 230 metres long with drafts up to 10.5 metres.  Once completed this will enable some of the vessels which currently have to be accommodated on OCP and Deep-Water Berth, to be berthed at Queen’s pier outer arm instead, thus increasing the port’s flexibility.

The project is due to begin in the New Year and has been subject to a full competitive tendering process.  The successful tender came from CMP Thames Ltd, based in Ringwood. They have undertaken to design, manage and construct the installation by the end June 2019.  The formal signing of contracts took place on 12th December 2018.

Julian Branford, Director at CMP Thames Ltd. said that ‘CMP Thames are delighted to be awarded this contract and it is a privilege to be working with Portland Ports who, from previous experience, are a pleasure to work with.’

Alex Hayes, General Manager Landside at Portland Port added that ‘It is great to be working with CMP Thames again after the successful completion of the OCP berth extension last year and to be part of the port’s continuous improvements.’