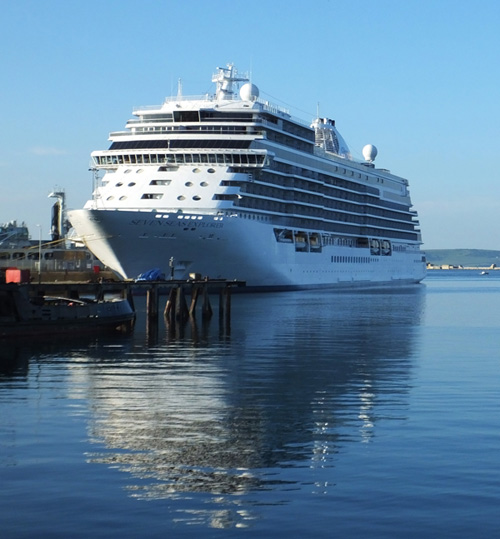 Portland Port’s 2019 cruise season is going to be another record breaker with the greatest number of cruise calls and passengers to date.  This has been the general pattern for the last 10 years, with numbers increasing from just 4 ships in 2008 to the 44 that are expected this year.  Along with the 44 cruise ships, they will be bringing more than 60,000 passengers into Dorset and the surrounding area.

2019 will also see the largest number of first-time cruise ships calling at Portland Port, 11 in total.  The first of these arrives on the first day of the port’s cruise season; the Costa Mediterranea arrives on the 9th April.  Costa Cruises was founded in 1854 as a cargo shipping company and moved into passenger services in 1947.  In 2000 they became part of the Carnival Corporation which also owns Cunard, Holland America Line and P&O Cruises to name only a few.

The Costa Mediterranea returns on 23rd April and then she is followed by two more first time ships, these however are also first-time cruise lines for Portland Port.  29th April will see Pullmantur’s Zenith visiting for the day, followed by Princess Cruises’, Crown Princess on 30th April.

Pullmantur Cruises is an all-inclusive Spanish cruise line which offers more than 40 years’ worth of experience in the business.  They operate 4 ships which are a mix of mid-sized and larger ships, allowing passengers to choose between a more intimate atmosphere and a resort style.  The Pullmantur Zenith makes a return visit to the port on 12th September.

Princess Cruises is an award-winning cruise line which has a fleet of 18 ships and has been taking passengers on cruises since 1965.  In 2003, Princess Cruises joined Costa and became part of the Carnival Corporation family.  This year, the port is excited to have not just one inaugural visit from a Princess ship, but three; the Crown Princess is followed by the Sea Princess on 10th July and Pacific Princess on 11th September.

After welcoming the mammoth 4000 passenger Norwegian Breakaway in 2018, the port is getting ready to welcome the second of Norwegian Cruise Lines Breakaway-class ships, the Norwegian Getaway this year.  The Getaway will be visiting the port on the 6th May and 25th October, the second visit being the last day of the port’s cruise season and a spectacular way to finish.

It is always exciting to see cruise ships in the port, regardless of their size, however there is one visiting this year which marks an extra special milestone for the port.  On the 20th July, Saga’s latest ship, the Spirit of Discovery, which has not even been launched yet, will be berthing at Portland Port.  What makes this so special, apart from it being brand new, is that this is the first time that the port has been included in the inaugural itinerary of a cruise ship.

Ian McQuade, General Manager – Commercial commented “2019 is going to be an exciting year all round for the port’s cruise business, and the visit by Spirit of Discovery on her inaugural cruise, is the icing on the cake”.

For every inaugural cruise ship visit, a traditional exchange of plaques takes place on board the vessel.  In 2014, Portland Port made the decision to change their plaque so that each first-time vessel could sail away with a little bit of Portland, in the form of a hand-carved Portland stone plaque.  The beautiful plaques are made by Paul at the Portland Sculpture and Quarry Trust and always receive a great response from the Captains.

As well as the first-time ships, the port is pleased to be welcoming back ships from Phoenix Reisen, AIDA, Regent Seven Seas, Seabourn, Holland America and the family favourite, Disney Magic.

The full 2019 schedule can be viewed on the Portland Port website; http://www.portland-port.co.uk/cruise+calendar 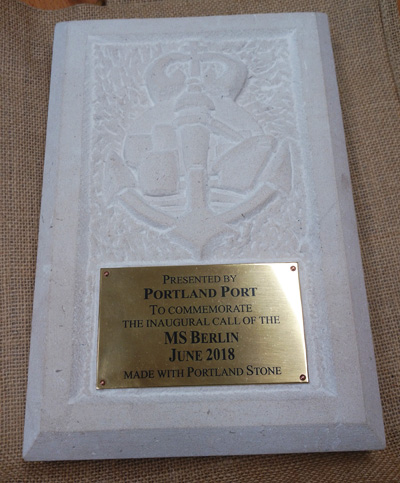 Picture: One of Portland Port's inaugural plaques from 2018